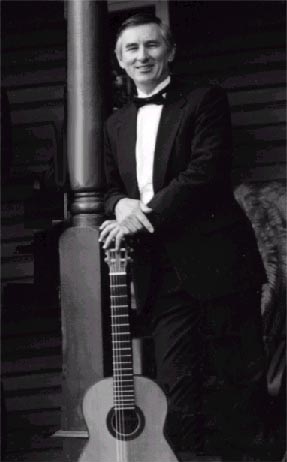 Inspired by a recording of Andres Segovia, Joseph turned to the study of classical guitar in 1967. His first lessons in classical guitar and music composition were from the music director of the Oregon Shakespeare Festival, Bernard Wendt, in Ashland, Oregon. He later studied guitar with concert artist Karl Herreshoff in San Francisco and music composition and counterpoint with Richard Felciano at University of California at Berkeley. Joseph has also studied in master classes with Michael Lorimer, David Russell and Christopher Parkening.

Based in Ashland since 1975, Joseph has persued his music career as a performer, teacher, and arranger/composer. He has performed many solo recitals in the Pacific Northwest and has toured with duet partners James Edwards (guitar) and Amy Moore (violin). He has performed with a variety of ensembles including the Cavani String Quartet, the Oregon Shakespeare Festival Musicians, Baroque Invasion, and the avant guarde trio Trapezium. He appeared as featured soloist with the Northwest Bach Ensemble, the Rogue Valley Symphony and was the guitarist on stage for the 2001 Oregon Shakespeare Festival productions of "The Merchant of Venice" and "Merry Wives of Windsor" where he was responsible for arranging all of the live music for both shows.

Joseph established the classical guitar program in 1976 at Southern Oregon State College (now SOU), where he taught guitar for ten years. He now teaches privately. Two volumes of his guitar transcriptions have been published with Mel Bay Publications and he has released one CD, "Baroque Masterworks".